How to Actually Learn a Language by Watching Movies

I have just over a week left in my French 90-Day Challenge and I want to go out with a bang: I’m going to watch a whole movie in French. I’ve been studying the language pretty extensively for a few months, so I should be able to do it, right? Did I mention I’ve been working through beginner material? That’s right, I’m a French neophyte and I’m about to watch a whole movie. Am I a fool? Maybe, but I’m a fool with a plan. Here’s what I did:
Step 1: I chose a movie I know well
Choosing a movie you’re familiar with means you shouldn’t ever be wondering what’s going on; you know the gist of the story already. 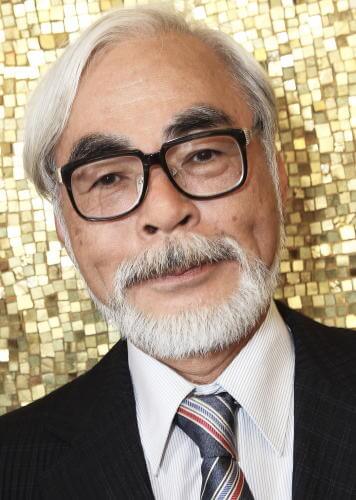 As a big Miyazaki Hayao fan, I decided to try one of his movies. I searched high and low for the French scripts to  My Neighbor Totoro and Spirited Away but was unsuccessful. I did, however, find a French script for the 1986  movie Laputa: Castle in the Sky – Laputa, le Chateau dans le Ciel in French – thanks to a generous fellow  French learner. I’ve seen this movie multiple times over the years, so it was perfect.
One of the great things about living in Canada is that DVDs are also in French (either dubbed or with French  subtitles), so I got the movie dubbed in French from the DVD store (yes, they still exist).
Step 2: I imported the script to LingQ
The LingQ system split the script into five lessons. Above each lesson I could see how many LingQs I would be making (111 in the lesson below) and how many blue words in the lesson (445). Each of the five lessons had A LOT of blue words – the numbers both excited and terrified me. 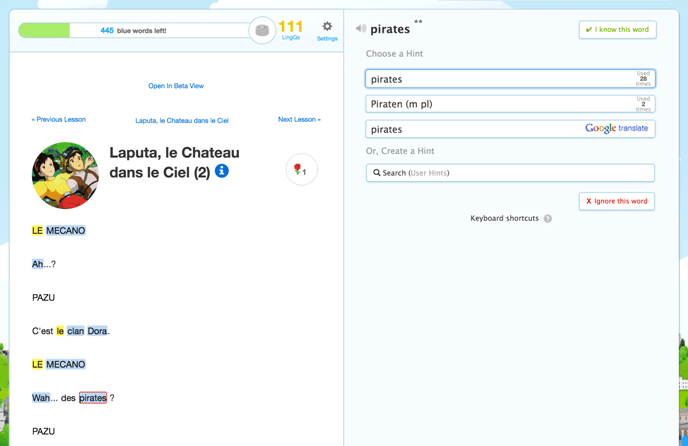 Step 3: I watched and LingQed
I was afraid that watching while studying the script in a language I don’t know all too well would take the joy out of the movie experience. Would it take too long and be mind numbingly boring? It was certainly a slow process, and I had to pause the movie constantly, but it didn’t bother me because I already knew what was going to happen. I never felt the frustration you would most definitely feel if you were watching a movie you had never seen before.
I wasn’t militant about understanding every single part of every single sentence; I allowed myself to skim over parts. This might be difficult to do if you’re a perfectionist, but trust me, the process will be no fun at all if you try to do too much. You can always go back to it a few months later when your level has increased and try to understand more.
Step 4: I reveled in the fact that I just watched and understood a movie in French!
Okay, so I probably could have understood most of what was going on if the movie was in Dothraki, but I still felt good afterward. I definitely felt swells of excitement when I was able to figure out the meaning of whole sentences and scenes in the movie.
I made hundreds of LingQs and renewed my motivation for learning French. I’m thinking another challenge will bring up my level to intermediate. What’s your experience of learning languages with movies?

Want to learn a language from content you love?

Need Inspiration to Stick with your Language Learning Goals?

How to import and study ebooks on LingQ