Mukbang Can Help You to Improve Your Korean!

Mukbang, The viral trend involving video hosts consuming vast portions of food, is a surprising new way to boost your vocabulary when learning Korean as a second language.

What Exactly is Mukbang?

If you enjoy browsing the internet, then you’ve probably come across a live feed of a Korean native diligently working their way through a vast pile of delicious-looking food in a single sitting, while also providing the viewers with a running commentary of their experience. Known as 먹방, or ‘mukbang’, the term is derived from the lengthier 먹는 방송, a combination of the Korean word ‘muk’, which means ‘eat’ and ‘bangsong’, which means ‘broadcast’.

If you’ve ever tried to pronounce Korean with the English alphabet, you will know that it does a very poor job of rendering the Korean language. As a result, 먹방is often mispronounced by English speakers.

Rather than being pronounced like ‘muck’, 먹 is pronounced more like ‘mock’ as in mock cream. ‘Bang’ is a little bit harder to describe in English, but it is definitely not like the sound a gun makes when fired; the best similar-sounding word is the first syllable of the Indian southern capital ‘Bangalore’. Simply pronounce the ‘bang’ of ‘Bangalore’ and add ‘mock’ in front of it, and you’ll be pronouncing 먹방 like a native Korean!

While answering what mukbang is and why they exist is complex, mukbang videos aren’t just helpful for anyone studying the Korean language, they also help you keep up with what’s new in Korean food, which is a huge part of Korean culture.

The History of Mukbang

Mukbang started in 2010 as a live streaming trend on Korean language video streaming provider AfreecaTV, which is short for ‘Any FREE broadcasting’.

The videos not only entertain viewers, they also serve as a conversation between the audience and the host. Mukbang hosts divide their time between the task of eating and the act of describing the food they are tasting.

A lot of Koreans see this as a real-time food review, which helps them choose their next meal. A lot of mukbang BJs, or broadcast jockeys, give genuine reviews, often trying out brand new exciting menus from established or up-and-coming stores, which are available for delivery almost 24 hours a day.

If a Korean comes home exhausted from a long day in the office and they want to eat something delicious, it is a no-brainer to select a dish from a store that has been positively reviewed by a mukbang BJ they trust. If a Korean hasn’t prepared dinner, well, the store the mukbang BJ ordered from is still open and taking orders, why not order as well and eat alongside them?!

Mukbang videos are also a form of companionship; Korean culture emphasizes the need to eat as a group rather than alone. While watching mukbang, you have a dining companion. While this may seem strange from a western perspective, remember that food is meant to be shared! What is the point of tasting something delicious if you have nobody to talk about the experience with?

For others, mukbang is about watching people eat something they can’t eat, maybe due to an allergy, or it could be about the ASMR aspects of food videos. Korean food is famous for being complex yet balanced in texture, flavour, and temperature – meaning it has an audible quality that is a pleasure to hear as well as taste. Think of the satisfying crunch of fresh kimchi, the delicious crack of fried mandu (dumplings), or the sound the slippery sauce makes that is poured on top of the Korean-style, Chinese-origin dish called Jajangmyeon.

Of course, most mukbang BJs specialize in eating large quantities of food, which can be part of the appeal – who doesn’t love watching a brave soul attempt a challenge? In a society that puts significant pressure on people of all ages to be slim, sometimes the best thing you can do when you have a particular food craving is to watch someone else eat it!

Mukbang is all about the sound of the food, the eater’s descriptions of the food, and the conversations going back and forth between live viewers and the host. This makes it the perfect match for the language learner eager to improve his or her Korean listening comprehension.

The benefits are in the repetition; most hosts repeat similar vocabulary expressions and order similar styles of food, so you’ll be sure to pick up new vocabulary words just by watching your favorite host for a few days, weeks, or months in a row!

You’ll also discover just how much joy there is to be found in Korean food culture – a lot of mukbang BJs react with real joy when tasting something that is truly delicious. This is a true, and very charming reflection of how Koreans eat and is something I personally think is one of the greatest elements of Korean culture.

Want to create a Korean lesson with a mukbang video? It’s super easy! Just download the LingQ browser extension ( available for Chrome, Firefox and Safari), find a mukbang video on YouTube then click import. You can then go through the video highlighting any words and phrases you don’t know to get translations. Those highlighted words and phrases will then appear highlighted in future lessons until you know them. Learning Korean just got a whole lot tastier! Here’s the lesson in the image below to get you started. 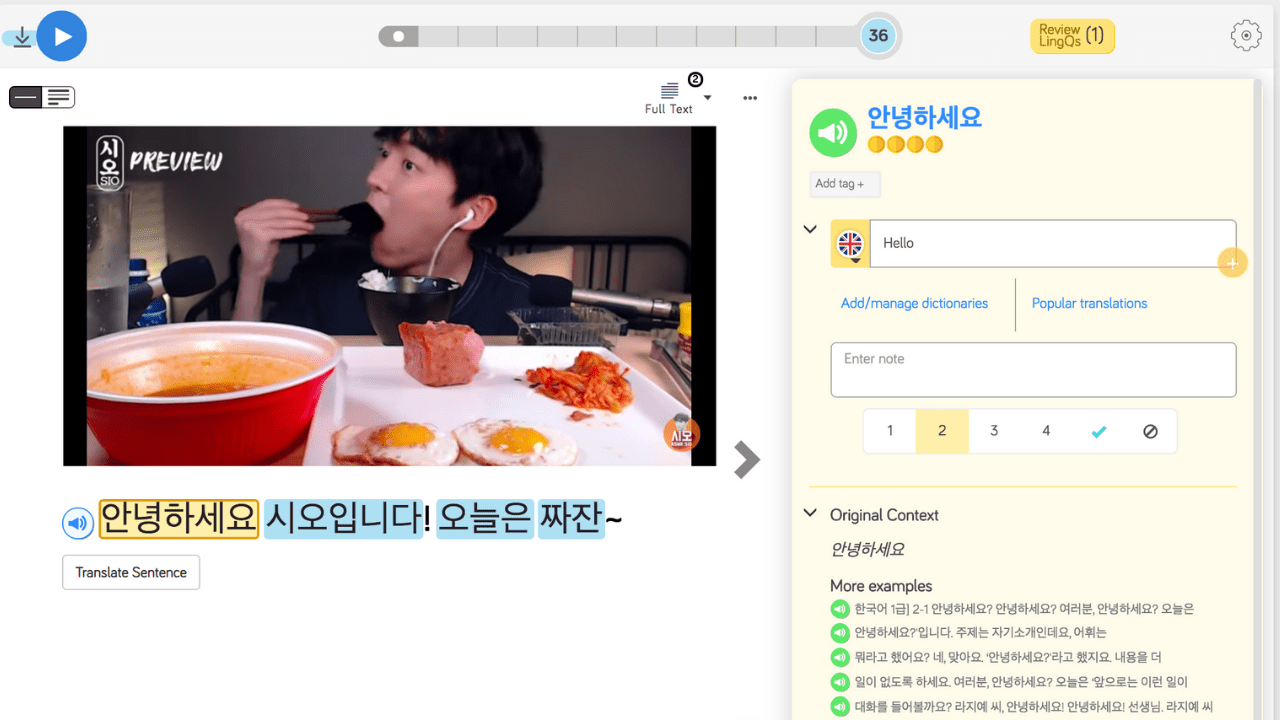 Mukbang might even inspire you to take a trip to Korea to taste real Korean food for yourself , and you should because nothing compares to Korean fried chicken that is made in Korea and delivered to your door.

If you’re interested in incorporating mukbang into your studies, there are many videos available on Korean language video streaming provider AfreecaTV as well as on YouTube and Twitch. The best mukbang are totally live and allow you to interact in real time with the BJ, as well as provide monetary tips to help keep your favourite mukbang master in business!

Some high frequency words and phrases you’ll hear in a typical Korean mukbang include:

Immersing yourself in Korean doesn’t require you to travel abroad or sign up for an expensive language program.
However, it can be a bit tiresome to find interesting content, go back and forth between sites, use different dictionaries to look up words, and so on.
That’s why there’s LingQ. A language app that helps you discover and learn from content you love.

You can import videos, podcasts, and much more and turn them into interactive lessons.
Keep all your favorite Korean content stored in one place, easily look up new words, save vocabulary, and review. Check out our guide to importing content into LingQ for more information.
LingQ is available for desktop as well as Android and iOS. Gain access to thousands of hours of audio and transcripts and begin your journey to fluency today.

Cute Japanese Words You Ought to Know